I wanted to set up a (shared) Google Photos album as my screensaver on Devuan GNU/Linux. I accomplished this with the venerable xscreensaver and a useful tool named rclone which I was already using.

On my CentOS 7 server, I already am using rclone. Starting with version 1.49, rclone supports Google Photos. EPEL provides rclone but only version 1.47. So download the upstream rpm release: Downloads page or direct link.
The utility comes with a cli-based configurator. Use rclone config and add a remote. I failed to save the output of when I configured it, but it’s as easy following the prompts to add a Google Photos remote. Choose the headless option, and it will show you a link to open in a browser where you can authenticate to Google Photos and then approve this application to use a token tied to your account. The browser will show you a code you paste back into the configurator.
In the end, what matters is that the ~/.config/rclone/rclone.conf includes a section like so:

And then my sync script is this:

The script itself ran great the first time, and downloaded all images (and videos) from the album. Upon second run though, the task seems stuck. Ah, well, I’ll solve that over time.
For a cron job to run this daily, add file /etc/cron.d/90_google-photos-sync.cron

And as with all good cron jobs, suppress the standard output and standard error and use the job itself to store logs.

On my Devuan GNU+Linux home theater PC, I use xscreensaver. To take advantage of a simple slideshow feature, make sure to have package xscreensaver-gl installed.

Select GLSlideshow and option “Only one screen saver.” The Tesselimage screensaver was very entertaining when used on personal photos but not all end users agreed with me.

Adjust sliders as necessary. I found that on the default settings, the slideshow would fade out and back in, on the same photo, about three times, before finally moving on to the next image. So these sliders’ positions were successful in always showing a new image on each fadeout, which was also slowed down.
On the advanced settings tab of GLSlideshow, the sliders were instantiated as: 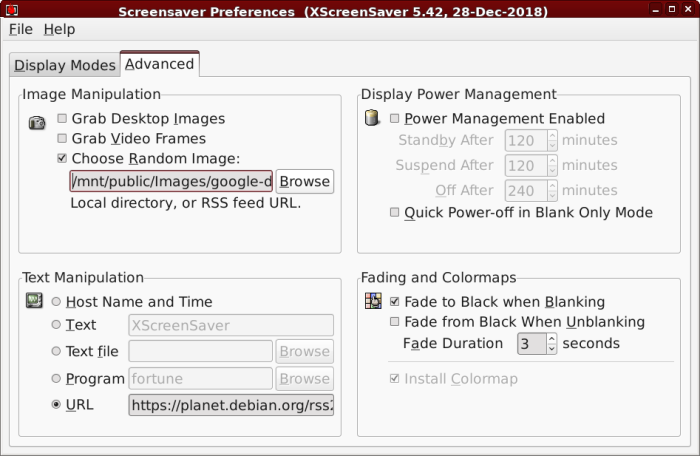 And of course, choose the destination directory (nfs mounted in my case) on the advanced settings.

For the really hardcore users, some of the relevant .xscreensaver values I could find include:

It is worth noting that the glslideshow entry is 143 lines below the programs: line.

Even though a Google Photos album that is shared might be accessed anonymously, the rclone utility requires an account.
Linux – keep it simple.

You will still get the warning “Hangouts phone calls will temporarily stop working in Firefox.” When making an outgoing call, you can dismiss the warning. However, I was unable dismiss the warning when receiving a call, which means I was not able to receive calls. I don’t know how to fix that part.

Also, on occasion, it simply wouldn’t make an outgoing call. Just cancel and try again, and then it will work.

If you use Google Calendar in Firefox, you might be unable to add calendar items. It displays this error: “Oops, we couldn’t create this event, please try again in a few minutes.”

A workaround was discovered by a user on the Google Calendar Help Forum.

I think I found an answer. Delete the google calendar specific cookies and reload. After I did this it lets me create events. YAY! Hope this works for others.

My main browser is Palemoon Portable which I run in Wine on GNU/Linux. I also use Gmail, Google Talk (the pre-Hangouts tool), and Google Voice.

In order to make and receive phone calls from my main web gmail page, I used this process.

This entire process was made possible by the fantastic users of the Portableapps.com community: portablealpha, taosk8r, acamp, and robertcollier4. It was that one page (weblink 1), and my working but disused Windows installation that made this whole process possible.

I realize I make life hard for myself, for using a web interface in a portable version of a small fork of a web browser in an emulator.

The story behind why I use this portable browser, in wine, on Linux, is this. When I first started getting on the Internet, I was a teenager and did not own my own computer. I had a flash drive, and I used it to store my personal files. I discovered PortableApps which let me use probably Firefox 2 or 3 from my flash drive. Even as I grew and got my own computers, I still kept my main web browser as a portable one so it would be relatively free from OS hooks so it was easy to transplant from system to system, as I migrated my main workstation. I built up a new installation every couple of years, hopping from Firefox 17 at one point to 27 to 33 to 38. After that, I switched to Palemoon 25 Portable and that is what I’m still on as of this post.

Now, 2016 was the Year of Linux on the Desktop for me, as I wanted to avoid the Windows 10 debacle. I had installed Korora 22 Cinnamon on a spare laptop in November of 2015 and from there made it my main system. In February of 2016 I copied over my Palemoon Portable install and it ran in Wine just fine! The only problem it had was it didn’t work with Google Voice.

This week I was trying to solve a VLC dlna problem where it was not finding my Plex server. I got frustrated with that (a bug that’s still unresolved https://bugs.launchpad.net/ubuntu/+source/libupnp/+bug/1571199) and transitioned into looking into the Google talk problem on Palemoon Portable.

Just wanted to let people know how I got the Google Voice plugin to work so that I could use the “Call Phone” feature from within gmail. This is *not* elegant but it’s the only way I could figure it out because the target computer is behind some nasty firewalls (and the Google Voice installer isn’t allowed to call home to download its files).

When you want to use Google Voice through Firefox Portable, run the exe in the Google Talk Plugin first, then start FFP and go to gmail. Note that once you exit gmail, it will stop the exe, so you’ll have to run it again manually if needed.

Anyone have any suggestions to automate this?

I found this thread again.. I cant seem to find where ff 4.0 puts these.. the info I get is:

Is this even still relevant?

You have to search your computer for those two files (real pain in the ass on newer windows machines because they try not to display any scary system files). Once windows can’t find it, click advanced, check include non-indexed, hidden and system files.

You also need to search for the folder “Google Talk Plugin” and copy that to the flash drive. It contains the executable that needs to be launched before Firefox is opened

Works without needing to load the EXE manually

Then it will work and the EXE will automatically load from Gmail.

Hi – there is one update. If you want the EXE to run automatically, you must add the following registry key with the proper path to googletalkplugin.exe so that it knows where to find it and load it automatically. It will work without adding the registry path – but if the registry path is not there as shown below then you must run the googletalkplugin.exe manually before loading the browser.

Did this page help you?

Buy me a coffee!